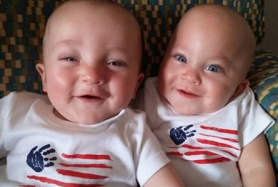 When child protective services separated Melissa and Anthony Geers from their five sons last spring, Melissa says, the pain was staggering. The worst part was watching the effects on their children: the 9-year-old’s full-blown panic attack, the 8-year-old’s holding his mom “so tight I couldn’t breathe,” the sudden interruption of breast-feeding for the 4-month-old twins (Melissa pumped throughout their foster placement).

The state filed to terminate the Geers’ parental rights just weeks after x-rays revealed rib fractures in both twins—but withdrew the suit 10 weeks later, after the Geers submitted opinions from eight outside experts who attributed the fractures to fragile bones, citing two underlying causes: First, the boys had a metabolic disorder that impedes bone formation. Second, like most twins, the youngest Geers had arrived early, 7 weeks early in their case. Because the rate of bone mineralization ramps up during the final trimester of gestation, premature infants in general are prone to weak bones. 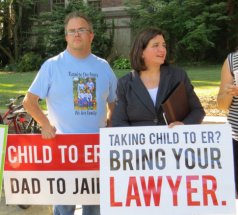 But those explanations entered the record only because the Geers did their own research and called in their own experts. The state tore her sons’ lives apart, Melissa says, based on the opinion of one child abuse doctor “who never met me, my husband, or our kids.”

“We have two sons, now 10 and 8, who were traumatized by this experience,” she points out. “They don’t do the things they used to do. They are afraid. The child abuse experts need to understand what they are doing to children.”

Since their story hit the news, Melissa says, they have been contacted by an astonishing number of families with their own stories of ill-considered abuse diagnoses—most of them with far less happy outcomes. “How are the child abuse doctors not aware of all these other things?” Melissa asks. “That’s the part that bothers me the most. Why are they not doing their due diligence?”

The Geers say they understand how valuable it was to have a supportive community during their ordeal, as documented by Click on Detroit and later by Melissa herself in an essay on Medical Kidnap. Melissa says she and her husband now feel compelled to do what they can to shed light on a broken system. Earlier this fall, the Geers joined demonstrators at the University of Wisconsin Board of Regents meeting, where supporters of Joshua and Brenda Burns protested the Burns family’s treatment by the university’s Mott Children’s Hospital. As reported on this blog in the spring, the Burnses’ daughter Naomi was diagnosed as a shaken baby at Mott in 2014. While Naomi seems to have recovered fully, Joshua is serving a one-year sentence in the county jail. As he approaches his December release date, Joshua had been granted weekly visits with his family, through a glass window and a telephone handset, after a year and a half of no contact at all with Naomi—but those visits were cancelled after the first one. (For an insider’s view of the regents meeting, including video statements by Melissa Geers and Brenda Burns, please see the Washtenaw Watchdogs coverage.) 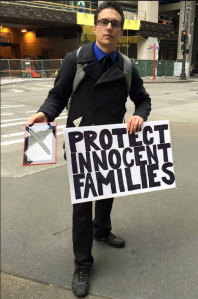 The Burns family and the Geers family found each other, and they also found the Protecting Innocent Families (PIF) petition, which calls for an objective, scientific review of the evidence base underlying today’s guidelines for diagnosing child abuse. The petition form includes an optional field where signers can identify the name of a defendant or family they are supporting. Of about 2,700 people who have signed the petition so far, slightly more than 1,000 have filled in the support field. The signers have named 338 individuals and families. The most frequently named case, with 270 signatures, is the Burns family, the subject of the Torn Family web site, which includes a link to the petition. The Geers family is the second most-often named, with 96 signers, presumably from their Facebook site.

Other defendants named in significant numbers were a mix of past cases that helped inspire the petition—like the stories of Kristian Aspelin, Brian Peixoto, Tiffany Cole-Calise, Amanda Brumfield, and Leo Ackley—and unfolding cases like those of Rebecca and Anthony Wanosik and Cynthia and Brandon Ross, reunited with their children this summer; Cindy Rosenwinkel, convicted in 2015; and single father Andrew Sprint, who declared his innocence outside the Children’s Justice Conference this past spring in Seattle.

When PIF launched the petition in March of 2015, the immediate goal was to collect the names of 1,000 people who had seen a medical misdiagnosis of child abuse tear apart an innocent family. Three weeks after the petition went live, 1,000 people had signed and signatures were still coming in. The rate has slowed since then, but new names continue to arrive, and PIF has decided to launch another publicity campaign before implementing its labor-intensive plan for taking the petition to Congress. Signers who indicated they would be willing to contact Congress personally should expect to be hearing from PIF volunteers.

Even when charges are dismissed, caretakers acquitted, or verdicts overturned, families are emotionally and financially devastated, with many unwilling to speak out because they are still traumatized or they fear stigma or retaliation. Doctors and other experts who question or criticize these diagnoses also suffer retaliation, including threats against their jobs and licenses.

Right now in England, for example, neuropathologist Dr. Waney Squier is facing hearings by the General Medical Council, where she is accused of testifying “outside her field of expertise,” giving biased opinions, and not paying “due regard to the views of other experts.” Last fall, The Telegraph reported that the original complaints against Dr. Squier came from the Metropolitan Police, who were tired of losing shaken baby cases because of her testimony on behalf of accused parents.

Dr. Squier has long been the target of direct and indirect harassment from her opponents. As reported in 2012 on this blog, a fictional character with a curriculum vitae remarkably like Dr. Squier’s confessed on the BBC program Silent Witness to having conducted her research using illegally harvested infant brain tissue. In fact, the real Dr. Squier had been readily cleared when the same accusations were levied against her—and some observers suspect those accusations were merely a ploy to keep her out of the courtroom during the resulting investigation.

In the U.S. in the early 2000s, forensic pathologist Dr. John Plunkett was forced to defend himself against charges that he lied under oath after he testified on behalf of an Oregon defendant in a child head injury case. In “The Battle of the Expert,” ABA Journal reporter Mark Hansen traced the byzantine course of the case against Dr. Plunkett, which ended with an acquittal in 2005.

Drs. Squier and Plunkett have also brought their criticisms of shaking theory into the medical journals. When Dr. Squier and her colleagues proposed an alternative to torn bridging veins as the source for thin-film subdural hematomas in 2009, their ideas were dismissed, but their model is now finding acceptance by doctors on both sides of the debate. Still, instead of considering the reasoned objections of their critics, some proponents of shaken baby theory demonize defense experts at conferences and in the press. After charges were dropped against Irish nanny Aisling Brady McCarthy earlier this fall, for example, Kevin Cullen at The Boston Globe quotes Dr. Eli Newberger calling shaken baby critics “defense whores”:

Newberger is dismissive of the revisionist views that defense attorneys are increasingly tapping.

“On the clinical testifying roster are a whole lot of people who will cut their consciences for money,” Newberger said. “They’re hired out as defense whores. I just find this vile.”

The Protecting Innocent Families petition is an effort to bring together the many people who are affected by misguided diagnoses of child abuse, including the accused families, their extended communities, and the medical and legal professionals who defend them.

If you agree that we need an objective, scientific review of the evidence base for today’s guidelines for diagnosing child abuse, please sign the petition, at http://bit.ly/InnocentFamilyPetition. If you have a web site or Facebook page, please post the  url. If you are a medical or legal professional, please consider sharing the url with your colleagues and clients (that’s http://bit.ly/InnocentFamilyPetition).

A number of individuals and families not mentioned above have also received quite a few votes of support, including Angela and Danny Frasure, Cor and James Thompson, Andrew Valdez, Megan Griffin, Marsha Mills, Rachel and Gourab Sahoo, Kacie and Raymond Hernandez, and a handful of people who would rather not be named publicly.