In a 96-page decision packed with irony, the Medical Practitioners Tribunal Service (MPTS) in Britain has declared pediatric neuropathologist Waney Squier guilty of practicing outside her area of expertise, ignoring the opinions of her peers, and tarnishing the reputation of the medical profession with her testimony and written opinions in a series of shaken baby cases between 2007 and 2010.

“The tribunal is in no doubt you have been a person of good character and have not acted dishonestly in the past,” the statement offers, but it characterizes her opinions about shaken baby syndrome as “dogmatic, inflexible and unreceptive to any other view” and declares her work in the arena “misleading,” “irresponsible,” and even “dishonest.”

For about the past 15 years, Dr. Squier, a consulting neuropathologist at the Oxford Radcliffe Hospitals, has been challenging the community of child abuse experts to reconsider the unproven model of shaken baby syndrome that’s been winning in court for decades. She has not only testified to her theories but also conducted research and published in the medical journals.

The charges against her were levied by the General Medical Council (GMC) at the instigation of prosecutors concerned that her testimony was impeding convictions in shaking cases, according to Dr. Michael Powers, QC, as quoted in the coverage by Robert Booth at The Guardian. The GMC will determine her penalty later in the month, possibly loss of her status as a practicing physician. 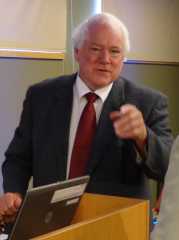 Dr. John Plunkett, a pathologist who has fought off charges of perjury for his testimony regarding shaken baby theory, pointed out that Dr. Squier is receiving a Champion of Justice award next month at the annual Innocence Network conference in San Antonio, Texas. “How is it that the Innocence Network can give this award to Dr. Squier if the GMC has correctly characterized her behavior as dishonest and worthy of sanction?” he asked.

Dr. Bergina Brickhouse, a psychiatrist whose husband was cleared of shaking accusations based partly on a report from Dr. Squier, wrote in an email, “If not for the strength, fortitude, and technical expertise that Dr. Squier has shown, my family would most assuredly have been ripped apart by well-meaning but ignorant medical staff.”

I would have expected adjudication of the charges to be conducted by a panel of physicians, but the MPTS set up a team of one retired psychiatrist and two lay persons—a retired Royal Air Force wing commander and a retired police officer—to evaluate the evidence against Dr. Squier. The members seem not to have read the medical literature but based their conclusions primarily on oral testimony given over several months of hearings that started in the fall. The panel’s report describes all of the prosecution’s expert witnesses as “credible” but articulates various objections to the experts called by the defense.

Forensic pathology professor Bo Erik Ingemar Thiblin of Uppsala University, for example, had explained how circular reasoning in the early shaken baby papers allowed the theory to become established without scientific proof, the same argument that convinced the Swedish Supreme Court to revisit the legal status of shaken baby theory last year. Dr. Thiblin is an expert in epidemiology, the study of patterns, causes, and effects in health conditions, a complex field that emphasizes assessment and analysis of the known facts. In a triumph for circularity, the tribunal rejected his testimony with this explanation:

“It was clear that Professor Thiblin did not believe in the concept of shaken baby syndrome, and his view of the literature was coloured by that. He was critical of the methodology of all the research literature in relation to the subject because of its perceived circularity bias. The tribunal considered that his expert opinion on non-accidental head injury lacked credibility; therefore the tribunal attached limited weight to his evidence.”

In an insightful editorial in The Guardian today, human rights attorney Clive Stafford Smith compared the tribunal to the trial of Galileo by the church for his theory that the earth orbits around the sun and not the other way around:

“I am convinced that Squier is correct, but one does not have to agree with me to see the ugly side to the GMC prosecution: the moment that we are denied the right to question a scientific theory that is held by the majority, we are not far away from Galileo’s predicament in 1615, as he appeared before the papal inquisition… It was not until 1982 that Pope John Paul II issued a formal admission that the church had got it wrong.”

One of the inexplicable elements of the decision was the tribunal’s finding that Dr. Squier had erred by testifying to biomechanical issues without any expertise in biomechanics—although the prosecution experts who testified in the hearings were, like Dr. Squier, physicians with no apparent specialized training in biomechanics (Dr. Richard Bonshek, ophthalmic pathologist; Prof. Rupert A. Risdon, pediatric forensic pathologist; Dr. Neil Stoodley, neuroradiologist; and Prof. Colin Smith, neuropathologist).

Similarly, the declaration scolds her for citing the 1987 paper by Duhaime et al. to support her observation that shaking without impact has not been shown to create forces sufficient to cause the brain injury. The tribunal said she had “completely misinterpreted what Duhaime had actually said,” even though the paper’s introduction says:

“It was concluded that severe head injuries commonly diagnosed as shaking injuries require impact to occur and that shaking alone in an otherwise normal baby is unlikely to cause the shaken baby syndrome.”

In a moving one-minute interview on the BBC, Dr. Squier said she is “devastated” by the finding, which she said has “enormous implications” not just for doctors but for any experts willing to testify in court. “You can give an honestly held, well-supported opinion and find yourself out of job,” she observed.

The charges against Dr. Squier are consistent with a strategy advocated by Detective Inspector Colin Welsh of New Scotland Yard in 2010 at the 11th International Conference on Shaken Baby Syndrome for improving the conviction rate in these cases by neutralizing experts willing to testify for the defense (see “Back Door Tactics Show Through“).

Proponents of shaking theory also ridicule their critics at conferences and scorn them in print, and in 2014 they attempted to block the premiere showing of the documentary The Syndrome, which they dismissed as “a national platform for the tiny handful of well-known child abuse defense witnesses to publicize their fringe message.”

An editorial this winter in the journal Pediatric Radiology, “Child Abuse: We Have Problems” by Dr. Peter J. Strouse, declares that “child abuse denialists” now pose “a growing threat to the health care of children and the well-being of children and families,” and calls on institutional rejection of doctors who defy the common knowledge about child abuse:

The court system seems ill-equipped to properly censure the denialists in spite of their deceitful and unethical behavior. Ideally, the legal system would practice peer-review by unbiased observers, but this does not occur. Institutions that harbor denialists, whether they be private practices or esteemed academic institutions, should carefully consider their employment.

Even in this environment, Dr. Squier has been willing to say in print and in court what her own research and experience were telling her about shaken baby theory.  I am in awe of both of her intellectual honesty and her courage, and I am horrified at Friday’s decision. The only silver lining I can think of is that maybe, this time, they have gone too far. The ironically named “determination of facts” released on Friday will not hold up to the scrutiny that Dr. Squier’s own work has already survived (see, for example, “When Pie in the Sky Turns Out to Be Dawning Knowledge”).

If you are not familiar with the debate surrounding shaken baby theory, please see the home page of this blog.

11 responses to “Guilty of Intellectual Honesty”