The Word Is Out

After 30 years of occasional, isolated coverage, both the national and the local media are starting to take a serious look at the debate about shaken baby theory—even as the accusations and convictions continue.

This past weekend Debbie Cenziper at The Washington Post published what I think qualifies as an exposé of shaking theory, the result of a full year of research that brought together the work of other Post staffers as well as students and teachers at half a dozen universities, including the Medill Justice Project at Northwestern University.

“Shaken Science: A Disputed Diagnosis Imprisons Parents” offers a thorough but engaging analysis of the issues, including  helpful diagrams and the most accessible press treatment I’ve seen yet of the biomechanics. Cenziper opens, of course, with the story of one accused caregiver and interweaves more cases along the way, so that the piece is not only informative but also readable. She also reports the thoughts of several physicians, including Dr. A. Norman Guthkelch, the first person to propose in print, in the British Medical Journal in 1971, that shaking an infant could cause subdural bleeding.

The National Center on Shaken Baby Syndrome (NCSBS) has released a response to the Post piece, listing the professional organizations that have endorsed shaken baby theory and protesting:

The Washington Post article portrays a “dispute” in the medical community as to the existence of SBS/AHT. There is a very small minority of proponents for the position that shaking cannot harm an infant, but this position is not supported by the science.

Like the letters protesting the film The Syndrome, the NCSBS response to the Post says that critics of shaking theory think that shaking a baby is not dangerous, although I don’t see anyone in the article making that statement. I think the question is whether the presence of the brain injury proves that a child was violently assaulted.

Cenziper’s article has been picked up in a number of regional newspapers, including the Hamilton Spectator in Ontario, the Daily Herald in Illinois, and the Dallas Morning News in Texa 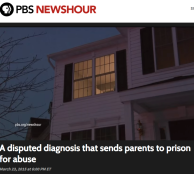 Then on Monday of this week, PBS NewsHour ran a segment on the shaking debate, a report titled “A disputed diagnosis that sends parents to prison for abuse.” The piece includes a look at the case of Drayton Witt in Arizona, whose appeal drew Dr. Guthkelch back into the arena, as well as interviews with child abuse pediatrician Dr. Lori Frasier—the author of a book on abusive head trauma written “for clinicians, investigators, prosecutors, and social workers”—and Katherine Judson from the Innocence Network.

Josh Burns with his daughter

Even before these national treatments emerged, regional news outlets had started giving sympathetic coverage to local cases. Last week in Michigan, Heather Catallo of ABC affiliate WXYZ  led off her video report about convicted father Joshua Burns with images of Burns’s supporters proclaiming their faith in his innocence at his sentencing hearing. The prosecutor argued for a harsh sentence, calling Burns a “danger” and objecting, “He’s not admitting that he did it. He’s still maintaining full innocence.” But the judge handed down the minimum sentence, a year in jail. Yesterday, WXYZ reported that prosecutors say they are not moving to terminate Joshua’s parental rights.

Also in early March, the Bennington Banner in Vermont ran a feature story by Keith Whitcomb Jr. about accused father Russell Van Vleck, found innocent by a jury in 2011 after a two-year nightmare for his entire family. Van Vleck’s son Colin, 5 weeks old the evening he quit breathing while lying on the couch next to his father, had been born with a skull malformation that had complicated his delivery.

And the film exposé The Syndrome, which premiered in the fall of 2014, is being accepted at film festivals across the country (coming up: the (In)justice for All Film Festival in Chicago, April 13, and the Arizona International Film Festival in Tucson, April 18), staying in the news and triggering more coverage of the topic.

Outside of the mainstream press, web sites targeted to attorneys are also addressing shaken baby syndrome. On Wednesday of this week, the American Bar Association published an article in its Children’s Rights Litigation section by Katherine Judson at the Innocence Network, titled “What Child Welfare Attorneys Need to Know About Shaken Baby Litigation.” In February, the site LLRX.com, which describes itself as a web journal offering resources for legal professionals, published a valuable review of the debate, “Shaken Baby Syndrome: A Differential Diagnosis of Justice,” featuring live links to court decisions, journal articles, and other resources, by attorney, librarian, and writer Ken Struton, and the National Association of Public Defenders published an essay by public defender Jill Paperno, “Another Step Away From Bad Science – a Review of the  History and Science of Shaken Baby Syndrome in People v. Rene Bailey (December 16, 2014, Monroe County, NY).”

Still, the community of child abuse experts and the justice system remain committed to shaken baby theory. Yesterday in South Carolina, an 18-year police veteran was in court, accused of shaking his 3-month-old son into permanent brain damage. According to the local news report, the prosecutor told the judge that the boy’s injuries “could only have been caused by a violent shaking or by a fall of 20 feet or more.”

In Oklahoma last week, a step-father was charged with abuse after reporting that the baby fell from a bed. According to the News 9 coverage:

Detectives said they knew [the stepfather] was not being honest about what happened after doctors said the baby’s injuries weren’t consistent with his story. “The baby had to be violently shaken for him to have these injuries,” [Det. David] Thompkins said.

And this week in New York, detectives revisiting an old case charged a mother’s ex-boyfriend with manslaughter for the 2010 death of a 13-month-old boy who suffered injuries “consistent with shaken baby syndrome.” According to the report in The Buffalo News, detectives had acquired a more definitive medical opinion and carried out an additional interview with the suspect:

“In questioning Gonzalez, detectives were able to confirm a few things, though he didn’t confess, but it helped our case,” [Homicide Capt. Joseph] Gramaglia said. “We also obtained a medical opinion that bolstered the case.”

I don’t know what it will take to stop the ongoing tragedy of shaken baby theory in the courtroom. I have taken one small step, though. I’ve signed the Protecting Innocent Families petition, which asks for an objective, scientific review of the evidence behind today’s guidelines for diagnosing child abuse.

If you are not familiar with the debate about shaken baby syndrome, please see the home page of this blog.