– from The Columbian coverage

A Washington state appeals court has granted a new trial to Heidi Fero, a mother and babysitter who was out of prison but still under court supervision on a child assault conviction when her appeal was heard. The decision, written for the 3-judge panel by Judge Linda CJ Lee, recognizes a change in medical thinking about both the timing of infant head injuries and the reliability of an abuse diagnosis in these cases. Specifically, the decision endorses this defense argument:

[N]ew material facts exist in the form of the now generally accepted medical paradigm that recognizes children can remain lucid for up to three days after suffering similar head injuries and those injuries are now known to be caused by much less extreme circumstances.

On a January evening in 2002, Fero was caring for pair of siblings, a 15-month-old girl and a 4-1/2-year-old boy, as well as her own two young children. At about 7:45 pm, she called the children’s father to report that the boy had been seen “pushing [his sister’s] head into the wall.” She says she comforted the little girl and, when she seemed to fall asleep, put her on a futon.

At 9:54 p.m., Fero called 911, after she noticed that the girl’s eyes were half-open and she could not be awakened. When the ambulance arrived at 9:59, the child was completely unconscious. 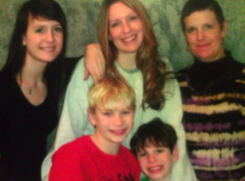 A family photo from the Free Heidi support page

At the hospital, doctors found subdural hematoma, cerebral edema, and retinal hemorrhages. According to the case summary, six prosecution doctors testified at trial that the findings could result only from a major trauma like a car accident, a long fall, or abuse by an adult, and that the child would have become unconscious almost immediately after the assault. Several of the experts seem to have specified that the girl had been violently shaken.

Fero was initially sentenced to 15 years, 5 years above the statutory limit because of the “special circumstances” of the infant victim’s extreme vulnerability and Fero’s failure in her “duty to protect” a child in her care. A 2005 decision reduced her sentence to 10 years, with the objection that the judge had not submitted the special circumstances to the jury for adjudication before applying them.

The 2014 petition that reversed Fero’s conviction included affidavits from two physicians, pediatric neuroradiologist Patrick Barnes, who testified for the prosecution in the highly publicized 1997 trial of “Boston nanny” Louise Woodward, and forensic pathologist Janice Ophoven, who has testified that shaken baby syndrome is “controversial” and “an ongoing debate in the medical field.”

The Fero decision offers this quote from Dr. Barnes, “Over the past decade, many doctors—including myself—have changed their testimony and beliefs to bring them into accord with the scientific evidence and standards of evidence-based medicine.” And on the subject of timing:

Given the new medical research on lucid intervals, the testimony of the State’s experts to the effect that [the girl] would have immediately gone unconscious is unsupported by the medical literature. It is impossible to tell from the radiology or otherwise in the medical record when [the girl] was injured, and there is a significant chance that she was injured before she arrived at Ms. Fero’ s home.

In her statement, Dr. Ophoven cited the 2001 position papers by the American Academy of Pediatrics (AAP) and the National Association of Medical Examiners (NAME) to support her contention that the testimony at Fero’s trial in 2003 reflected the thinking of the medical community at the time. The AAP position paper has been superseded, however, by a 2009 statement that recommended clinicians avoid the term “shaken baby syndrome,” in favor of the more general “abusive head trauma,” and contained no specifics about diagnosing the condition or timing the injuries. The NAME paper expired without renewal and has not yet been replaced.

[I]t is my opinion that much of the medical testimony presented during Ms. Fero’ s 2003 trial is no longer scientifically valid in light of recent advances in the medical community’ s understanding of the natural, accidental and non-accidental causes of cerebral edema, subdural hematoma and retinal hemorrhages.

Ophoven also concluded that the child had probably suffered her head injury about 12 hours before the first CT scan, that is, before she had been dropped off at Fero’s house.

In his statement opposing Fero’s petition, prosecuting attorney Anthony Golik did not address the question of whether medical opinion has indeed changed, focusing instead on the timing of the petition and the argument that new opinions by new experts should not constitute “newly discovered evidence” for the purposes of re-opening a case:

Every murder, serious assault, rape, etc, would be subject to vacation and retrial whenever a defendant found an expert to write an affidavit indicating there were new scientific theories which would explain the evidence in such a way as to possibly exonerate the defendant. This simply cannot be the standard this Court applies in Fero’s situation. A new medical opinion or a new medical theory is not a “material fact.”

Although the filing came more than a decade after her conviction, the judges concluded that Fero had exercised “reasonable diligence” regarding timeliness, considering that she was in prison when the medical debate was building and needed time after her release to find an attorney who could research the debate. The decision cited four other cases in the past few years where the convictions of child care providers were vacated—Audrey Edmunds in 2008, Kathy Henderson in 2012, Jennifer Del Prete in 2014, and Rene Bailey in 2014—based on the argument that a change in medical thinking over the past few years constituted “newly discovered evidence.”

This approach has been effective in righting past wrongs, but ironically, it will be less persuasive against recent convictions (like those of Cammie Kelly, Michelle Heale, and Joshua Burns, for example), since the debate has now been raging for a decade or more.

With the decision, the court released Fero from court supervision while she awaits the state’s response.

Like so many women in her position, Fero has received the support of her family and community through the years, and the decision in her favor noted:

Fero also submits several exhibits attesting to her positive influence on others while in prison. These are irrelevant to her petition to this court because they are not material to the conviction.

Press coverage quoted her attorney, J. Christopher Baird of Perkins Coie LLP in Seattle, who said, “Our client is a truly wonderful person, and it feels great to get the result we feel she deserves.”

If you are not familiar with the debate surrounding shaken baby syndrome, please see the home page of this blog.