As registration opened this spring for the Fifteenth International Conference on Shaken Baby Syndrome/Abusive Head Trauma, coming up in September in Montreal, the National Center on Shaken Baby Syndrome (NCSBS) also revamped its web site with a dynamic new design that features bold graphics, clickable factoids, and easy access to resources for both families and professionals. The published conference program shares the new look and embraces the organization’s commitment to fighting criticism of shaken baby theory through public relations.

In a keynote address on opening day, for example, the program promises advice from an executive at the global PR firm Weber Shandwick on “How to Craft a Message,” with this elaboration:

“The media’s reporting of abusive head trauma/shaken baby syndrome (AHT/SBS) over the last several years has focused on wrongful convictions and alleged ‘new science’ that challenges the existence of AHT/SBS. Despite the efforts of many individuals and organizations to re-frame the discussion and educate the media about the realities, the press increasingly covers the subject this way. Ranny Cooper, former Chief of Staff for Senator Ted Kennedy and an expert in strategic communications, will discuss why the media reports the way that they do and what we can all do to ensure that the messages we want get to the public.”

A later keynote will deliver the NCSBS’s preferred message regarding the 2008 exoneration of child care provider Audrey Edmunds, released after 11 years in prison based on an appeal by the Wisconsin Innocence Project arguing that medical thinking about shaken baby has evolved since her 1996 trial. Assistant District Attorney Tom Fallon, from the county that convicted Edmunds, will revisit the case from this perspective:

“Some media, some legal commentators, her lawyers and Ms. Edmunds herself claim exoneration… Is that what really happened? You decide whether this is fact or whether you are being misled.”

Storytelling is a recurring theme in the conference program—another keynote, titled “Power of the Narrative,” features this description:

“In this panel presentation, three child abuse pediatricians will talk about SBS/AHT cases that have resonated with them and the importance of talking about these cases with other professionals and with the media to inform everyone about the realities and devastating consequences.”

I welcome the new note of reconciliation offered in this blurb for a plenary session by two mothers with a unique, unthinkable bond:

“Tami Revering lost her patience and reacted by shaking her best friend’s, Angela Pengelly, baby. Now, Tami and Angela work together to share their personal experience of the impact this has had on each of them and how their experience has led them to educate others about how this can happen to anyone, and that forgiveness, while not easy, can help with the healing process.”

from the babble.com treatment

A treatment of the women’s story on babble.com listed a skull fracture among the baby’s injuries, which raises the question in my mind but not in the article of whether the incident the caretaker reported, shaking the boy and then throwing him on the bed, fully explains the findings. The Guiding Star Project, a holistic mothering web site, ran the care provider’s first-person account of her tale. I’m extrapolating that the NCSBS has hired a PR firm to help place these stories on the web.

The conference program also lists dozens of breakout sessions, including one that promises a case report from Australia of a fatal shaking with an independent witness. I look forward to learning more.

I am guessing that in the session “The Medium Is the Message: Journalists and Documentary Filmmakers Distort the Child Abuse Story,” law professor Joëlle Moreno will dismiss Debbie Cenziper’s 2015 exposé of shaken baby in The Washington Post as well as the documentary “The Syndrome,” which she scorned based on the trailer at the fourteenth shaken baby conference in 2014 in Denver, a few weeks before the film premiered. In her 2014 keynote, Prof. Moreno also discounted the work of law professor Deborah Tuerkheimer, who Moreno said is “confusing causation with culpability,” and pointed out that the documentary “Scenes of a Crime,” which ultimately led to a new trial and an innocent verdict for convicted father Adrian Thomas, is not about the shaken baby controversy but about the “lengthy interrogation” in that one case. “Part of our job,” Moreno said in 2014, “is to explain to the media that AHT is not newsworthy because it’s controversial. It’s newsworthy because it’s real and it’s deadly.” (For a link to Prof. Moreno’s condemnation of the minority opinion in the Shirley Ree Smith decision, please see “Dissent Into Confusion: The Supreme Court, Denialism, and Shaken Baby.”) 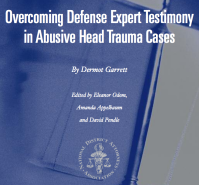 This fall, Maryland assistant state’s attorney Dermot Garrett is scheduled to run a session titled “Overcoming Defense Expert Testimony in Abusive Head Trauma Cases,” also the title of a document by him that’s available on the National District Attorneys Association web site. Garrett’s talk with the same title at the 2014 Denver conference focused on rebutting the jury’s innocent verdict in the 2006 trial of Miles Ferguson, an accused father who enjoyed massive support from his family and church community. Garrett argued that Ferguson’s likability had obscured the medical facts, and he criticized the “handful of defense experts” who testify in these cases for what he said are “financial incentives.”

I’ve attended nine conferences organized by the NCSBS over the past 18 years, and I have never heard a speaker revisit a lost or overturned case with the thought that the child abuse doctors might have been wrong. Instead, I’ve heard reviews of the prosecution’s case, presented with indignation at the loss. This mind-set offers no mechanism for the diagnosing doctors to even acknowledge let alone learn from past mistakes.

At the upcoming conference, Dr. Christopher Greeley is scheduled to offer his review of the published shaking research in a session titled “Demystifying the Medical Literature: Separating the Wheat From the Chaff.” I’m guessing he will include his criticism of the 2003 paper by Dr. Mark Donohoe, who reviewed the shaken baby literature through the lens of evidence-based medicine and concluded that shaken baby theory has no scientific foundation. In a keynote at the 2012 NCSBS conference, Dr. Greeley condemned the search criteria Dr. Donohoe used to identify the papers he examined, but did not offer a list of the additional papers that would have provided more scientific evidence. For a good example of Dr. Greeley’s approach to the literature, I suggest reading his analysis of Dr. Steven Gabaeff’s 2011 paper questioning the connection between the brain findings and a shaking diagnosis.

I found in the program two breakout sessions that promise to present the defense perspective. In “Cognitive Bias in SBS/AHT Diagnosis,” innocence project attorneys Barry Scheck, Keith Findley, and Katherine Judson will share the dais with Dr. Mark Graber, whose specialties include diagnostic error, and Prof. Stephen Feinberg, PhD, a statistician at Carnegie Mellon University. And the second segment of the two-part session “What Do We Do When the 911 Call Comes In?” could be lively, as it features both child-abuse prosecutor Leigh Bishop, who argued the case against Hang Bin Li in Queens, and independent attorney Heather Kirkwood, who has worked on a number of successful appeals, including those on behalf of Julie Baumer, Ernie Lopez, and Ostwelt Millien.

I also see a handful of sessions on prevention, and one on an effort to create a reliable instrument for diagnosing abusive head trauma based on evidence-based criteria. I do wish these researchers well, as I think we all share the goal of preventing abusive head trauma and improving our ability to identify it accurately.

If you are not familiar with the debate surrounding shaken baby theory, please see the home page of this blog. Sue Luttner does not believe that shaking a baby is safe, only that the brain findings do not prove abuse.