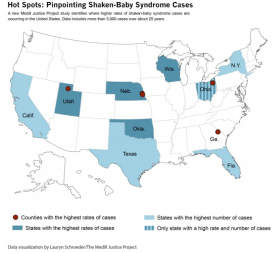 2020 Update:  The Medill Justice Project has reorganized and refocused. The links on this page that no longer work have been deactivated.

A year and a half after calling for cases to build a database of shaken baby syndrome accusations, the Medill Justice Project has published a thin slice of its data, in conjunction with its analysis of how cases are distributed across the country. The view into the database is very narrow, but the county-by-county searches can be fascinating.

As Lauryn Schroeder writes on Medill’s SBS site, the rates of reported baby-shaking vary widely across the country. She offers a map of SBS hot spots and examines the situations in the states and counties with the highest concentrations, which seem to this reader to correlate with regional child-protection strategies that encourage police and hospitals to work together. The county that prosecuted immigrant father Hang Bin Li last year, for example, makes Schroeder’s list:

Queens County, N.Y., which lies southeast of Manhattan, has the 10th largest population by county in the United States and ranks third in the nation for total number of shaken-baby syndrome cases. After adjusting for population, it ranks 36th in cases by county per 100,000 people. Experts said the Queens County District Attorney’s Office is nationally known for aggressively prosecuting shaken-baby syndrome cases. The office also co-sponsors an annual conference with the county medical examiner’s office on abusive head trauma that invites medical and legal professionals nationwide to learn about the diagnosis, investigation and prosecution of these cases.

“A poor investigation doesn’t help anyone,” said Queens County Senior Assistant District Attorney Leigh Bishop. “I wouldn’t have a job if there was just a formula to prosecuting these cases. They’re all different.”

Two of the four counties with the nation’s highest rates of reported shakings lie adjacent to each other in Nebraska, where state law mandates multidisciplinary teams that include police, social services, and medical professionals for investigating child abuse. Schroeder quotes a prosecutor in Sarpy County, just south of Omaha, who explained that the different agencies on the team “review the cases together and if they need help they assist each other… [The law] added continuity and consistency in the area instead of having multiple agencies try and tackle a problem independently.” 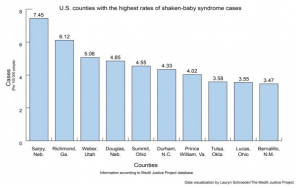 For a readable image, see the Medill web site: http://www.medilljusticeproject.org/2013/12/10/hot-spots/

Medill has posted only the barest data about each case:  the sex of the presumed perpetrator, the state, and the county. I tried searching my own county, which is reported to have had a population of 1.84 million in 2012. The Medill database, available directly at http://www.medilljusticeproject.org/visualization/, lists four cases.

Tipped off by Schroeder, I then searched on Queens County, with a reported population of 2.27 million in 2012. Medill lists 28 cases in Queens, literally seven times as many as in my county, for a population not quite twice the size.

When I searched for Middlesex County, Massachusetts, where Louise Woodward was prosecuted in 1997, with a 2012 population of 1.54 million, just a little smaller than my 4-case county, Medill reported 18 cases—and Middlesex didn’t even make the cut for the story.

It’s hard to know, of course, how accurately the Medill numbers reflect the true incidence of SBS reports, given the lack of any national mechanism for tracking them, but the students seem to be doing a reasonable job, as reported in this posting last February.

The introduction to the database invites us in:

The data now available reflect the information the project has reported on  so far: A posting in August revealed that men are much more likely to be accused of shaking infants than women:  http://www.medilljusticeproject.org/2013/08/27/the-gender-gap/  I’m hoping the students will make additional fields visible as they complete future analyses.

The Medill Justice Project is still soliciting cases:  If you have a case that is unlikely to be in their database, you can contact them at medilljusticeproject@northwestern.edu.