A jury in Yolo County, California, has found 40-year-old Quentin Stone not guilty of child endangerment and abuse, in a case that highlights the limitations of the common knowledge about both the potential danger of short falls and the timing of symptoms following infant head injury.

The story begins in early September of 2012, when Stone brought his son Sam, then two months old, to the Kaiser clinic with a report that the boy had fallen from a bed onto a hardwood floor. Sam showed no symptoms at the time, and doctors found nothing alarming during their examination. The boy was brought in again the next day with a report of projectile vomiting, and again he was examined and sent home. A series of emails and another in-person visit document his parents’ ongoing concern with Sam’s continued vomiting and episodes of “breath holding” over the following days and weeks.

Sam Stone had both a twin and an older brother.

Then on October 3, Sam collapsed and his father rushed the unconscious boy to the hospital, where scans revealed both fresh and chronic subdural hematomas.  Doctors diagnosed Sam as the victim of abusive head trauma. According to trial coverage by Sarah Dowling at the Democrat News, prosecutor Steven Mount dismissed Stone’s claim that his son had fallen off a bed in September:

Mount said except for Stone’s testimony, there is no evidence that a fall even happened. Instead, Stone could have gotten angry with the child or simply wanted to stop him from crying. Regardless of the motivation, Mount said that Stone could have shaken the child, coming up with the “fall story” to cover it up.

Stone had said he wasn’t in the room when the boy fell. He had left Sam in the middle of a king-sized bed and gone briefly out to the garage. When he returned, Sam was on the floor. Sam’s twin brother Henry was asleep in a swing, but Stone thought their other son Jack, two-and-a-half at the time, might have pulled the boy off the bed.

Public defender Monica Brushia said she was sure from the beginning that her client was innocent. “Just reading the police report, I knew the doctors had misdiagnosed Sam, which led to his death… This was a very difficult and emotional case.” Both she and co-counsel Martha Sequeira cried real tears while preparing for trial, Brushia reports, and again when the verdict was read.

Brushia shared a Facebook posting from one of the jurors, whose account of the trial included this paragraph:

Today, an innocent man was set free of blame and accusation of the death of his son. Mr Stone didn’t abuse his child, he did everything he could do to save him. The sad fact is Dr’s make mistakes, sometimes they miss things, sometimes they are wrong. The death of this child really was at the hands of 2 Kaiser Dr’s, who went against what another Kaiser specialist had warned. 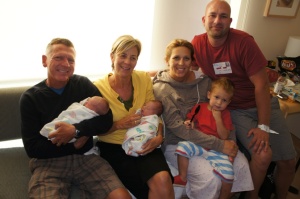 Mr. Stone is now trying to regain custody of his surviving sons, with whom he is allowed only weekly supervised visits.

Dr. Plunkett’s report included a few paragraphs that might be educational for anyone working on one of these cases. On the subject of chronic subdural hematoma, for example, Plunkett wrote:

Sam had a large chronic SDH and a small acute left-sided SDH when Woodland and Davis’ personnel evaluated him. A chronic SDH, sometimes referred to as an hygroma, must begin either as an acute SDH or as an intradural effusion. A predominance of blood or blood products typifies a hematoma. A high protein-content fluid with medical imaging signal features similar to cerebral spinal fluid (CSF) characterizes an effusion. It is often not possible (clinically or radiographically) to determine whether a chronic SDH began as intradural bleeding or as an effusion. If the chronic SDH started as acute bleeding, the acute SDH may be large and require surgical evacuation, may resolve and heal with no apparent signs and symptoms, or may become “chronic”. If the acute hematoma does not resolve, it develops a membrane that is extremely fragile and has many new, immature blood vessels. These blood vessels may rupture, causing “new” bleeding and an increase in the size of the initial SDH. There have been a number of studies to determine why some acute hematomas become chronic. The best explanation appears to be that the unique characteristics of the clotting system in the hematoma itself allow the bleeding to persist rather than to heal. The Medical Imaging literature has documented this phenomenon in studies following hospitalized SDH patients with serial CT and MR scans, which show new bleeding in established hematomas in the absence of trauma. “New” trauma is not required for this progression.

And regarding the origin of subdural bleeds, which can be caused by impact but also by a number of non-traumatic circumstances:

Impact may cause dural compartment bleeding in an infant. The infant skull is not rigid, and may deform significantly during an impact, even without fracture. This deformation, or inbending, distorts the underlying brain, and may stretch the bridging veins, may physically alter the dural venous plexuses, and/or may activate the trigeminal (“V”) cranial nerve. If these changes exceed the tensile failure threshold for the veins or the plexuses, they rupture and bleed into the dural border cell layer (“the subdural space”). If the rupture involves relatively large vessels, the bleeding may be significant and lead to rapid compromise of brain function and death, even with timely and appropriate surgical intervention. Alternatively, the bleeding may be relatively slow and even asymptomatic for a considerable time, and only lead to clinical signs if there is an increase in head circumference or an increase in intracranial pressure, the latter triggering vomiting, seizures, and/or compromise of respiratory function. The impact may be apparently innocuous and extremely low velocity. Scientific studies using adult human volunteers (scaled to the infant), cadavers, non-human primates, and other experimental animals; accident reconstruction; computer modeling; and finite element analysis have established and validated infant human brain injury g and Head Injury Criterion (HIC) thresholds. The current federal head-injury standard for a 6-month-old infant represented by the CRABI-6 dummy is a Head Injury Criterion threshold of 390 and a peak g threshold of 50 (50 times the acceleration due to gravity). The researchers have not established thresholds for a 3-month-old infant. However, they are lower than for a 6-month-old infant. A simple headfirst impact to a non- yielding surface from as little as a two-foot fall will usually exceed these thresholds. Fatal impact head injury in an infant does not require a motor vehicle accident or a fall from a two- story building.

These thresholds imply an “all” (risk of severe injury or death) or “none” (no risk of severe injury or death) event. However, biological systems including human beings are seldom “all” or “none”. Further, underlying conditions such as an abnormality of the blood coagulation system, individual cerebral vascular anatomy, cerebral atrophy or increased extra-axial fluid, and an individual’s unique metabolic pathways may alter the threshold and outcome for impact trauma.

Sam had a history of a significant impact event, but I will discuss briefly non-impact causes of dural bleeding for completeness. I do not think that any of these conditions caused or contributed to Sam’s initial acute bleeding with the possible exception of birth or an increase in extra-axial subarachnoid space (so-called “benign” expansion of the subarachnoid space, or BESS).

A number of “natural diseases” and metabolic abnormalities predispose to, or are associated with, SDH. However, anatomical research suggests that damage to the dural venous plexuses rather than traumatic stretching of the bridging veins causes the SDH in these cases. Examples include but are not limited to:

Finally, hypoxia or anoxia may cause subdural hemorrhage either as a primary or as a secondary event. For example, hypoxic damage to the dural venous plexuses rather than mechanical trauma is the most likely cause for intradural hemorrhage that may lead to subdural hemorrhage when hypoxia is associated with an increase in intracranial pressure.

7 responses to “A Yolo County Jury Believes the Father”